I Love the Bronx: Park on Point

Hunts Point Riverside Park, located at Lafayette and Egdewater Avenues, is a small neighborhood park that provides direct access to the Bronx River.

Many people don’t even know the park exists.

Some 20 years ago, when I worked at the Hunts Point Fruit Market, the area was a dumping ground.

In 2007, the park’s full renovation was completed. Today it is equipped with spray showers, an amphitheater, fishing pier and a canoe/kayak launch.

It was a full day.

Casita Maria presented the “Coming of Age Celebration” with artist Dennis RedMoon Darkeem. The celebration included creating your own Native American-inspired medicine bag. Participants drew their designs on a piece of leather, and tems, including an assortment of shells, rocks and feathers, were selected by each person. Next, we were encouraged to find something within the park, like a rock, twig or a leaf. All these pieces were placed inside our bags, which were secured with leather straps.

The final step was a “smudging.” As Darkeem explained, “Smudging is the process of cleansing negative energy from things and our bodies.” Sage is used in this ceremonial practice to pay respect to our ancestors and to the animals whose hides were used.

The day’s activities didn’t end there.

Rocking the Boat was offering free community rowing, and we took full advantage.

Though my kids and I have canoed the Bronx River dozens of times, this was our first time on the river in a boat. And these were no ordinary boats. The fleet used by Rocking the Boat was built by teenage students involved in their boat-building program.

I had the pleasure of being escorted by staff member Danny. He was eager to share details on the amazing restoration work done in the River and what he’s learned in the program. He spoke about his own transformation since joining the organization, and his love for the waterways.

Lastly, Acuator Inc., a design and production company, held its Second Annual Barbeque. Its CEO and founder, Pope Jackson, a Harlem native and a Bronx resident, held the company’s first BBQat Hunts Point Riverside Park last year. He loved that the park was local, yet undiscovered. He and his guests were so impressed with the venue that he chose to return to it again this year.

The barbeque was quite a success. It was great fun to observe the excitement of a child flying a kite for the first time, as was watching both children and adults participating in a potato sack race.

Our parks offer more than just a place of respite, they are used as gathering spaces for the community. Before the summer ends, whether it is Hunts Point Riverside Park or another hidden gem, make sure to visit a park you’ve never visited before. 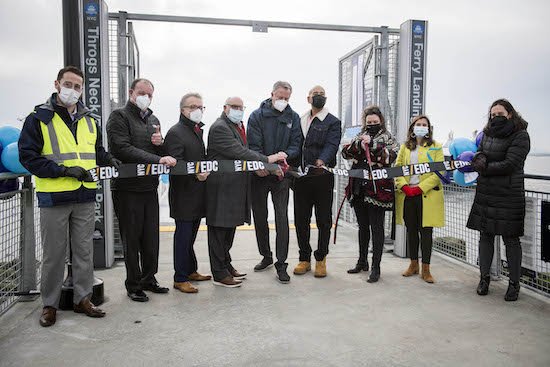