Marísol and Daniel Mejía sat in the plush red velvet seats of the United Palace’s front row, listening to the fourth movement of Dvorak’s New World Symphony one recent afternoon. Their children, Nomar, 9, and Daneyra, 12, were on stage, performing in the orchestra.

They are rehearsing for a special June 28th performance at the Palace in Washington Heights.

More than 150 children from New York, New Jersey and even New Orleans youth orchestras will converge on the Palace to play as one. Jamie Bernstein, the daughter of the famed composer and conductor Leonard Bernstein, will host the evening.

The Mejías are a musical Bronx family.

The children play the trumpet in UpBeat NYC’s after school program three times a week. At home, they practice with their father, who follows along on the keyboard. The children have only been in the program for six months, but they’ve already performed in a concert and won a prize.

“They really like it,” said their father. “I thank God that I got them into this program. I really love it for the kids.”

Like all of the other orchestral programs feature in the concert, UpBeat NYC is an El Sistema-based program. El Sistema originated in Venezuela. Its basic tenet is that when children are introduced to music, society not only has better musicians—they ultimately end up with a better society.

Liza Austria, UpBeat’s co-founder, said their Bronx-based program has taken off this year. They have a total of 110 students, both in orchestra and pre-orchestra programs. The children have been performing a lot, traveling to other boroughs, and meeting other young musicians.

“The exciting thing about it is that a lot of kids don’t necessarily leave their neighborhood in the Bronx,” she said. “So they are seeing other kids doing they same thing. In our neighborhood, there’s not another orchestra. They don’t know other kids do this.”

UpBeat NYC is very much a family affair. Austria, along with her mother, brother and husband, run the program. They took inspiration from their late father, Jaime Austria. A bass player for top New York orchestras, he was excited about El Sistema programs and talked about it all the time.

He felt elitism stifled creativity and music. Orchestras weren’t racially diverse and there was too much emphasis on becoming a first chair. At the same time, children in families with fewer resources don’t get exposure to orchestras and don’t learn music in school.

“He had a vision of music being accessible to everyone,” Austria said. “It’s not because children don’t have the ability and the talent—it’s because they don’t have the opportunity. It is too expensive.”

Like UpBeat NYC, the Washington Heights and Inwood (WHIN) Music Project also had a modest start. Less than two years ago, David Gracia began the program after receiving an Abreu Fellowship from the New England Conservatory of Music.

He doesn’t yet have enough space or resources for all of the children that would like to participate. “Without a doubt, this is a great place for a program like this to flourish,” he said.

He sees children who’ve never played before get better very fast. “Kids see other kids playing an instrument and they want to play, too,” he said.

To that end, WHIN is experimenting with a peer mentorship program. Children with more experience team up with kids who are just learning. “This builds leadership skills,” Gracia said. “By doing that you not only spread skills but you also build community.”

El Sistema programs are orchestra-based and focus mainly on classical music. But WHIN’s choir program incorporates gospel, jazz and other types of music in many different languages.

Parents tell Gracia that their children’s academic performance has improved since they’ve taken up music. “It’s not because music makes you smarter,” he said. “But because there’s an energy that they have.”

Mott Haven resident Sylvia Sangurima agrees. Her two daughters, ages 10 and 6, are both in the UpBeat NYC program. “It helps them concentrate,” she said. Her older daughter now tries to learn things perfectly. “Before, she didn’t do that.”

“This seems like a natural progression,” he said. “We’ll take our two youth orchestras and add four others and show the world what these kids are learning—and how it’s changing their lives.”

The Mejia family is excited about playing the Palace, too.

“We are really looking forward to the concert—especially in a place like this,” he said.

"Parents are the first teachers”

A Change for All
Un Cambio para todos 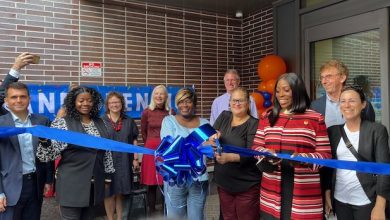