The Study of Sotomayor

Appointed in 2009, Justice Sotomayor is the first justice of Puerto Rican heritage, and its third female justice.

She met the group from Adjunct Professor Jerry Goldfeder’s Election Law class in a conference room just off the Court itself on Thurs., Jan 22nd.

After opening up the meeting with brief welcoming remarks, Justice Sotomayor answered questions on topics such as whether she follows the impactof the Court’s decisions, and the possible reasons for an increase in election law-related cases.

Also discussed were the particular challenges encountered by women in the field of law.

“The Justice was warm and thoroughly engaged and, of course, extremely thoughtful,” said Goldfeder. “I was told that she very much enjoys speaking to young people, especially to law students. This clearly came across.”

After the meeting, photos with the Justice were taken, and students met with one of her law clerks.

“With the Justice’s clerk, there was a lot of give-and-take that provided great insight into the way Justice Sotomayor works, the relationship among law clerks throughout the Court, and how decisions are crafted,” reported Goldfeder. “There was no question that the law clerk thoroughly loved her job.”

A staff member from Congressman Eliot Engel’s office also provided a tour of the United States Capitol, which included of the Old Supreme Court Chamber.

It was the first time that Goldfeder had arranged such a trip for his class, and he hopes to provide similar experiences to future students.

“I was obviously very pleased to be able to arrange this visit. It enabled the students to learn about the judicial process in a very special way—and to meet a very special person.”

Stress in the BX 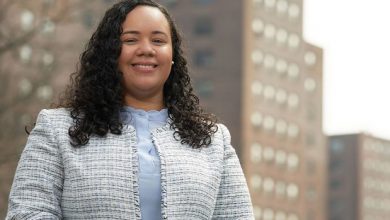 On the line
En la línea