This past Mon., Jan. 21st, Supreme Court Justice Sonia Sotomayor swore in Vice President Joseph Biden at the presidential inauguration. She was the first Hispanic to administer an oath of office in American history.

Justice Sotomayor, the first Latina to serve on nation’s highest court, also became the fourth female judge in history to administer an oath of office.

In personally selecting Justice Sotomayor to deliver the oath, Vice President Biden said, “From the first time I met her, I was impressed by Justice Sotomayor’s commitment to justice and opportunity for all Americans, and she continues to exemplify those values today. Above all, I’m happy for the chance to be sworn in by a friend – and someone I know will continue to do great things.”

Visit the original Hall of Fame

Built in a sweeping semicircular Neo-Classical arc with wings at either end, it provides a panorama across the Harlem River to the Cloisters in Fort Tryon Park and beyond to the Palisades. The Hall remains a unique and patriotic reminder that this country’s phenomenal growth has been due to the vitality, ingenuity, and intellect of these individuals.  The principal feature of the Hall of Fame is its 630-foot open-air Colonnade, which houses the bronze portrait busts of the honorees.  The 98 bronze busts that line the Colonnade are original works by distinguished American sculptors. The bronze tablets recessed in the wall beneath the busts carry inscriptions of significant statements made by the men and women honored.

Among the master sculptors represented here are Daniel Chester French, sculptor of the Lincoln Memorial; James Earl Fraser, whose work includes the figures of “Justice” and “Law” for the U.S. Supreme Court, and Frederick MacMonnies, whose reliefs grace Fifth Avenue’s Washington Arch.

The Hall of Fame is open to the public for self-guided tours daily, between the hours of 10:00am and 5:00pm and guided tours by appointment only. Two weeks advance notice is suggested.

Admission is free for self-guided tours, but a $2.00 donation per person is encouraged.

Bronx Borough President Ruben Diaz Jr. invites residents to attend and speak at the Bronx Borough Board Public Hearing on the Mayor’s Preliminary Budget for Fiscal Year 2014 on the capital and service needs of the borough.

The meeting is to be held this Wed., Feb. 6th from 10:00 a.m. to 12:00p.m. at the third floor litigation room at 198 East 161st Street. The hearing is intended to provide an opportunity to representatives from local non-profit organizations, colleges, hospitals, schools, and neighborhood organizations to speak on the Mayor’s proposed budget and on the capital and services of the borough.

Verbal testimony will be limited to 3 minutes per speaker.

Please forward a copy of your written testimony to the above email no later than January 30, 2013 and bring 25 copies with you on the date of the hearing.

Anyone interested in presenting testimony should send an e-mail message with his or her name, title, organization and telephone number to bmccray@bronxbp.nyc.gov to register in advance of the hearing.

Cheeky gibbon at the Zoo

As announced this past Wed., Jan. 16th, the first gibbon born at the Bronx Zoo since 2000 arrived. The infant was born to mother, Christine (or “Kicks”), and father, Milton. For 15-year-old Milton, this is his first offspring. Thirty-five-year-old Kicks is an experienced mother and this is her 11th baby.

The Bronx Zoo has a successful history breeding gibbons as part of the Species Survival Plan, a cooperative breeding program designed to enhance the genetic viability of animal populations in zoos accredited by the Association of Zoos and Aquariums.

Adult gibbon females are a buff color with a black crown while males are black white light-colored cheeks. All newborns are born with a buff coat that turns black over their first two years. Once they reach sexual maturity, males remain black and females change back to their lighter color. Keepers have not yet determined the gender of the infant.

Kicks, Milton and their new baby live in JungleWorld, a spectacular indoor Asian rainforest habitat that features several multi-species exhibits. The naturalistic habitats create a total immersion experience for guests and are home to animals found in the jungles of Asia including the white-cheeked gibbons, ebony and silvery langurs, Malay tapirs, Asian small-clawed otters, as well as many different species of reptiles, birds, and fish.

White-cheeked gibbons are a critically endangered species native to parts of Vietnam, Lao PDR, and China. The species is threatened by deforestation and hunting. The Wildlife Conservation Society works throughout Asia and in the white-cheeked gibbon’s native range to save wildlife and wild places. The group’s mission is to support the dance community with a competition showcasing local and regional dance groups. By training and preparing for this event, organizers wish to enrich, strengthen and improve individual dancers and dance groups.
For more information or for advanced tickets please visit www.PreludeDanceCompetition.com.

Project Compass is a free job training and placement assistance program, exclusively for re-entrants in specific neighborhoods, including in the South Bronx.

Participants must meet all of the following requirements to qualify for enrollment in the fortune Society’s Project Compass Initiative:

For more information please contact Carmen Bautista at 347.510.3686 or send an e-mail message at cbautista@fortunesociety.org.

All residents are invited to the New York City Health Department and Transportation Alternatives (T.A.) for a hands-on workshop on the Play Street permit process. Those interested will be guided through the Play Street application process and will meet with an experienced local Play Street organizer, who will share tips about how to make individual Play Streets a success.

Rumpelstiltskin is a story about bullying and friendship, and will feature songs, dancing and original dialogue collaboratively written by the cast.

Prof. Prince is a prolific composer of musical theatre pieces, and has won 10 consecutive ASCAP merit awards for her educational and children’s music. She has collaborated on original plays with established playwrights, cast members, and students of all ages, including works for the Manhattan School of Music Summer Program, the Renaissance After School Program of P.S.9M, the Multiple Intelligences School at P.S.37x, the Hebrew Institute of Riverdale, and various community centers.

At Lehman, Prof. Prince has staged musical productions of Rapunzel, Cinderella, Rumpelstiltskin, When I Get To Where I’m Going, and Sleeping Beauty.

In preparation for a March opening, there will be a week-long job fair to hire more than 400 employees in total between the two concepts.

Usnavi, always at your service 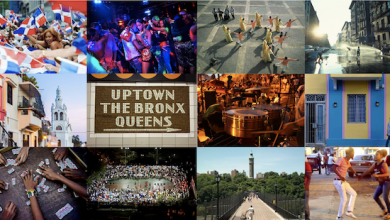