Ritual, not rest, on the seventh day

It is their ritual.

The group of women gathers on the last Sunday of every month.

Like others in observance, hey hew to custom. As they join together at sites throughout the city, many are garbed in pink t-shirts and blue bandannas. They play instruments, and hold placards, banners and flags.

They sing and chant – for exactly 33 minutes.

This past Sun., Jan. 25th, the group, 33 Mujeres NYC x Oscar, came to Northern Manhattan, assembling at the intersection of 181st and Broadway to call for the liberation of Oscar López Rivera.

“The last Sunday of every month a group of 33 women manifest for 33 minutes,” explained Natasha Lycia Ora Bannan, President-Elect of the National Lawyers Guild (NLG).

33 represents the number of years that Puerto Rican nationalist López Rivera has spent incarcerated on charges of seditious conspiracy against the United States government.

He is currently serving his sentence in an Indiana prison.

López Rivera, a Vietnam veteran whose service earned him the Bronze Heart, has spent decades in federal prison after the U.S. government linked López Rivera to the Fuerzas Armadas de Liberacion Nacional (FALN), a Puerto Rican nationalist group charged with violent acts, including bombings, during the 1960’s and 1970’s.

Though López Rivera, a staunch advocate for Puerto Rican’s national sovereignty, has consistently denied any involvement, the U.S. government accused him of being involved in the 1975 bombing of downtown restaurant Fraunces Tavern and charged him with the crime of seditious conspiracy.

Arrested on May 29th 1981, López Rivera was sentenced to 55 years in prison. 15 additional years were later added to his sentence for an alleged escape attempt.

López Rivera’s defenders claim that his sentence is disproportionate with the charges he was accused of, as he was never found guilty of harming or killing anyone.

“He was never convicted for any violent crimes and because he wanted to see a free Puerto Rico he has been incarcerated for 33 years,” said Bannan, noting that the crime López Rivera was convicted of is a “common charge brought upon independence activists, such as Nelson Mandela.”

In 2011, López Rivera requested parole, but it was denied.

Now age 72, supporters say he is the longest held political prisoner in the history of Puerto Rico.

Ana López (no relation), New York Coordinator to Free Oscar López Rivera, said she found the incarceration “illogical,” and said that President Obama is the only one in a position to release López Rivera.

The group says they will continue to press on, every last Sunday of the month, flags and instruments in hand.

And while it is women leading the charge, all are welcome.

Maximino Rivera (no relation) has joined the group repeatedly.

“His crime was to fight for Puerto Rico’s independence,” noted Rivera. “We all should be committed to Oscar’s liberation.”

“A good thing to do”
“Una cosa buena que hacer” 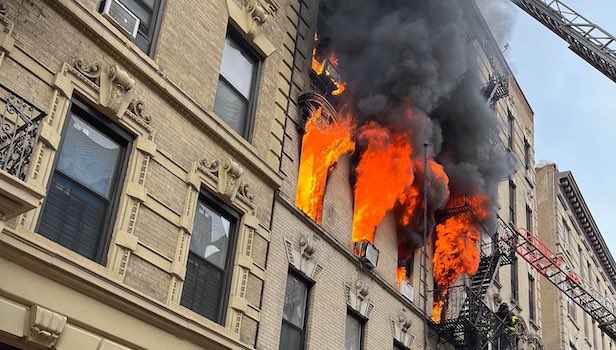