Making the grade in style

Story and photos by Gregg McQueen.

Monitoring cosmetology businesses should be as easy as A-B-C, according to local legislators.

The system would be similar to the one used to grade restaurants and food service establishments.

“All we want is to protect the safety of the residents of New York City,” said Díaz.

This past Wed., Jan. 7, Díaz and Councilmember Espinal revealed their plan on the steps of City Hall, joined by Councilmembers Andrew Cohen of the Bronx, Mark Levine of Manhattan, Rory Lancman of Queens and David Greenfield of Brooklyn.

The legislation also includes a provision to create a “Customer’s Bill of Rights” for salon and spa patrons.

Businesses would be required to post the Bill of Rights in full view of customers. A third item calls on the New York State Division of Licensing Services, which provides licensing for cosmetology professionals, to expand its health and safety training options.

According to Díaz, increased regulations are needed for beauty businesses, as they currently have minimal oversight.

Díaz explained that his aunt went for a recent pedicure and ended up with a toe infection that required an emergency room visit — a result of unsanitary equipment at the salon she visited.

Holding up salon instruments such as cuticle scrapers and razor blades, Díaz said, “The reality is that whenever we go into a place of business that uses one of these, that has dead skin on it, to me that is a mini-medical procedure.”

“I’m confident that all of the new measures we’re looking to put in place will ensure that consumers are protected and have the necessary information in order to make sound decisions on whom they choose to patronize,” he added.

Díaz stressed that the intent behind the legislation is not to penalize salons and their workers.

He said his office has held discussions with salon businesses to get their feedback on proposed legislation, and Díaz has called for training and grace period to comply with any new regulations put in place.

“That way, we can bring them up to speed before any inspectors come in,” he said. Levine said that cosmetology businesses worried about the new legislation should not be, as it will ultimately increase accountability and transparency in the industry.

“When the restaurant grading system was proposed, there were howls of panic that this would be bad for restaurants,” said Levine.

“But the opposite had happened,” he added. “Consumers have learned to love the grading system, and rely on it, and it has rewarded great restaurants.”

Espinal said that while most cosmetology businesses in New York City offer a sanitary environment, there are many reports in recent years of dirty establishments.

Rommy Pennella, Executive Director of the New York Hispanic Cosmetology and Beauty Chamber of Commerce, stated that the number of violations in cosmetology businesses throughout New York State have increased 56 percent since 2012.

“Most of these violations stem from customer complaints that are investigated,” she said.

Pennella said that the proposed regulations will keep salons honest, as they will want to maintain good ratings to stay ahead of other salons they are competing with.

“I think it’s a great way of creating more clients when customers know the grades, and also everyone will know the salon is sanitary,” commented Pennella.

The legislative package calls for periodic retraining of licensed practitioners and an increase in the number of inspectors available to monitor cosmetology businesses.

Currently, there are only 20 inspectors statewide for the industry, said Díaz. “That needs to change,” he remarked.

The Borough President said he believed that many salon businesses in the city are operating without a license – and that also needed to change.

“We don’t want to put them out of business,” he stated. “We want them to get trained and licensed.”

“This is really common-sense legislation,” said Cohen. “Consumers will know that facilities have been inspected and follow the rules.”

I am Paris, I am Ayotzinapa...

From rink to riches De la pista a la riqueza 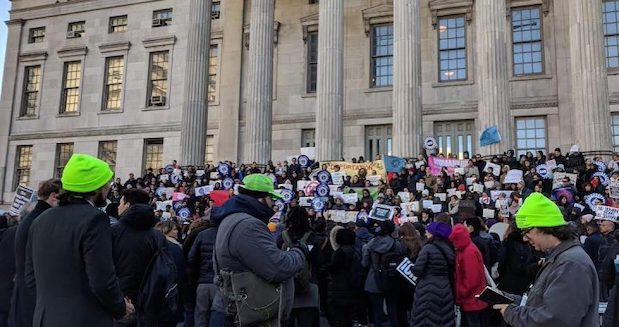