Lights up on Lehman

It is the largest – and now the newest – venue in the borough.

Thanks to a $15.4 million renovation, Lehman Center for the Performing Arts boasts a new look.

The renovations added 5,595 square feet of space, and the center boasts a new entranceway and box office area, as well as upgraded seating, elevators, restrooms, and administrative offices.

Founded in 1980, the Lehman Center for the Performing Arts is the largest entertainment venue in the Bronx.

She remarked that the center’s new glass facade makes it look a bit “like Lincoln Center” from the outside.

The venue is now also ADA-accessible, with ramps and wheelchair viewing areas.

“It will make a huge difference and open us up to so many more people,” said Bornstein.

“It’s rewarding to see this space renovated, fully ADA compliant, with new bathrooms, new seats, all the upgrades that are a signal to people that this is a great performing arts center,” remarked City University of New York (CUNY) Chancellor Dr. Félix Matos Rodríguez, who recalled watching numerous performances at the venue over the years, including “ballet, salsa, all kinds of music.”

“The best of the best get to perform here in the Bronx, and this center is a connection for bringing that level of cultural arts and activities,” he said.

Bornstein said that tickets for the 2,276-seat theater are intentionally priced at affordable levels, to allow more community members access to the arts.

“My nephew tried to see The Nutcracker in [Manhattan]. Ticket prices were $600. Here, you can see it for $10,” Bornstein said.

“There are so many families who cannot afford to see their favorites at other locations, but they can afford to do that here,” said Bronx Borough President Rubén Díaz Jr.

He recalled the borough’s role as the birthplace of hip hop and doo wop, and as a hub for salsa artists. “One of the major components in our DNA is music. And here you can go from ballet to b-boy, you can go from Shakespeare to salsa,” he said of Lehman’s arts center.

Bornstein said she considers it the center’s mission to engage Bronx residents who might not otherwise have access to cultural events.

“Not only are we educating Lehman students, we are educating the entire community,” she stated. “This is a great opportunity for children to attend cultural events and broaden their horizons.”

José Luis Cruz, Executive Vice Chancellor and University Provost for CUNY, said the renovations “take it up a notch” in terms of Lehman’s ability to attract talent to perform at the arts center, and offer more ambitious programming.

“The aesthetic look will also improve the campus,” said Cruz, who served as Lehman’s President until May. “A lot of the investment has gone to make sure we’re accessible for older patrons as well as patrons with disabilities, which will go a long way in diversifying and expanding the community members that can join our events.”

Funding for the renovation project was provided by Governor Andrew Cuomo, Office of the Borough President, New York State Legislature, and the New York City Council. Goya Foods has been a major sponsor.

Bornstein said upgrades to the theater’s lighting and sound system have been done on a regular basis over the years.

“It’s expensive to maintain a theater. We constantly need support from elected officials,” she said. “There’s always something that needs to be fixed.”

A typical season for the venue runs from September to June.

Bornstein noted that the theater was able to continue programming during the construction phase, which began in late 2017.

“They really made a huge effort working around us. They took their time and really respected our season,” she said.

Johana Gracia Lara, a senior music major at Lehman, expressed hope that the refurbishment would bring more attention to the theater.

“It’s a hidden gem in the Bronx,” she said. “I’d like to go to my next-door neighbor and say, ‘Hey, want to go the Lehman Performing Arts center?’ and they wouldn’t go, ‘What’s that?’ It would be nice if it became more well-known.”

Gracia Lara performs in the school’s choir and in the Community Chorus.

“You have people from the neighborhood also participating, singing these really complicated pieces of music, these masses and ballads,” she said. “We end up rehearsing here and having the shows here. It brings the community together.”

In thanking those who contributed to the renovations, Díaz took time to praise former Bronx Borough President and current CUNY trustee Fernando Ferrer. He said Ferrer fought for improvements to Lehman College, including the arts center, at a time when it was difficult to get the city to invest in the Bronx.

“He laid the foundation, when everybody ran away from us, when very few people believed in us,” remarked Díaz. “For little boys and girls who didn’t have great institutions to look to, or who played in rubble like I did, he laid the foundation so that in the future they could make something of themselves.”

Following the ceremony, Ferrer said he appreciated Díaz’s comments, and reminisced about times he spent on Lehman’s campus when he first started dating his wife, who attended the college.

“It’s always nice to come back to a place that means something to you,” he said.

“This is a very big deal,” Ferrer said of the revamped theater. “This center has been a center of arts and culture in the Bronx, and any investment in it is an affirmation of the important work they do.”

The Lehman Center for the Performing Arts is located on the Lehman College campus at 250 Bedford Park Blvd West, Bronx, NY 10468. 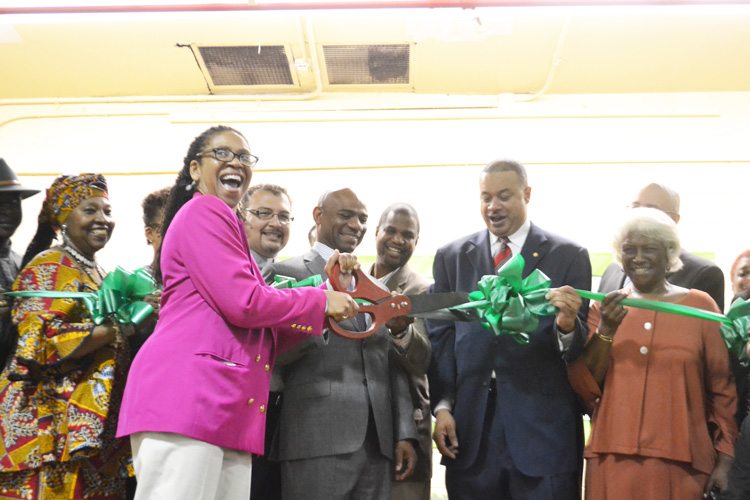