I Love the Bronx – No Longer Empty

“I am a Bronx native, daughter, sister, mother of three beautiful Bronx babies, photographer, writer and motivator,” says contributor Nilka Martell, of Puerto Rican descent, as she continues to explore her hometown.

Here is her latest installment.

I always been fascinated with the massive Beaux-Arts building known as the Old Courthouse, which is located on streets of East 161st Street, between Brook and Third Avenues.

At times, its facade was strewn with graffiti, and for almost four decades, it has been closed to the public.

Two months ago, I was invited to a community input meeting at the courthouse. No Longer Empty, a not-for-profit whose mission is to “activate public engagement with contemporary art through curated, community-responsive exhibitions and education programs that revive underutilized properties,” hosted the meeting.

The group would be occupying the old Courthouse for its exhibition “When You Cut Into the Present the Future Leaks Out,” (a quote from American novelist William Burroughs), and had helped organize the meeting to receive community input.

I was not sure what to expect, but was very excited about having access to the building. A group of over 50 people attended, including representatives of community-based organizations, elected officials’ offices, community gardens and schools. There were also local residents and artists.

During the meeting, attendees shared stories and memories of the building. Artists asked questions and many stayed for hours brainstorming programming ideas. I listened attentively, glad to be present for such an amazing moment in time.

The opening reception on Apr. 23rd was well attended with hundreds flocking to the Courthouse.

Though I’ve been fortunate to be exposed to art throughout my life, I have not always understood it. This exhibit, however, had a number of installations that I found thought-provoking and compelling. Among some of my favorite pieces was a 12 foot long, 3-panel, plywood installation of the Bronx River by Melissa Calderon and the reconstructed timeline of the Lindbergh kidnapping by Skowmon Hastanan.

The building has tremendous history and is an architectural gem. Marble floors, ornamental designs, and exposed intricate brick patterns are just a few of the many glimpses into the past. Moreover, the ongoing No Longer Empty exhibition will include local walking tours, a fashion show, community gardening projects, panels and much more.

“We need to do something”
“Necesitamos hacer algo” 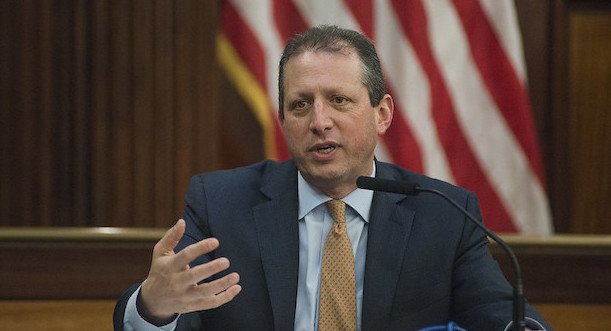