The Julio Martínez Memorial Fund at The Acacia Network

At a ceremony of the Julio Martínez Memorial Fund (JMMF) held at Casa Promesa this past Sat., Jan. 26th, nine local college students were each presented with $1,000 in scholarship money.

The scholarships, which target students who have encountered hardships early in life, or overcome great obstacles to attend college, are awarded annually by The Acacia Network, one of the largest social and medical service providers in New York.

“We want to give opportunities that people wouldn’t ordinarily have,” said Milagros Baez-O’Toole, who serves as Acacia’s Chairperson.

The JMMF was established to honor Julio Martínez, a former drug addict who sought treatment and then became an advocate for New York State to provide services and housing to the substance abuse population.

“At that time, there were little to no programs in New York City, especially for the Hispanic community,” said Baez-O’Toole, chairwoman of Acacia Network. “Martínez changed that.”

After several public battles with then-Mayor Edward Koch, Martínez was granted 10 vacant buildings by the city, which were turned into residential substance abuse treatment facilities for homeless men and women.

Martínez became a central figure in the organization that eventually became Acacia Network, and though he is now deceased, the annual scholarship keeps his legacy alive.

“We try to identify students in the community who could become future leaders,” remarked Hon. Hector L. Díaz, president of Acacia Network.

As for criteria, Díaz said the students “need to have good grades, good character.”

Fundraising efforts such as an annual donor breakfast provide Acacia Network with funds for scholarships and to help the children of clients in their drug program.

“The scholarship is not a large amount of money, but it helps the students,” said Díaz. “We also give to families who need it.”

Griselle Rosales, a junior at Lehman College majoring in social work, is active in her community and has worked two jobs to help her family.

“She’s a special young lady,” remarked Baez-O’Toole, as she presented Rosales with the scholarship award.

Legally blind and a mother of three, Marybeth Meléndez is currently in a masters program at the University of Staten Island. She proudly accepted her award and said it was indication that people can do anything if they put their mind to it.

“I’ve just been accepted at Rutgers to do Ph.D. work,” she said.

Kevin Linares, who overcame struggles with drug use at any early age to focus on education and clean living, accepted a JMMF honor for the third consecutive year.

Baez-O’Toole said that Linares is asked to speak at numerous JMMF fundraising events to report on his progress in college.

“He’s proof of how successful these young people can be if they’re given a chance,” she said.

“It’s truly an honor,” remarked Linares, who studies finance at Pace. “This program was the first one that supported me.”

Jennifer Fernández, a new student of Queens College, is a double major in two seemingly disparate subjects – economics and dance. “People always ask me why I combined those two majors,” said Fernández. “One brings stress, and one is a stress reliever, so it’s a nice balance in my life.”

Since it’s typically uncommon for a mother and daughter to both attend college at the same time, the women said it was very a special to receive the JMMF honor together.

“We inspire each other,” said Pérez. “We help teach and motivate each other every day.”
Romero, clearly moved by the event, struggled to find words to express herself.

“It’s an emotional moment,” she said.

Scholarship recipient Liliete López was born blind in Nicaragua, where she was not allowed to receive education because of her disability.

When she moved to the United States at age 13 years old, she could not read or write, and had yet to attend a school of any type.

Now 35, she is closing in on a degree in political science and urban studies at Queens College and is a member of the Academic Senate there.

“Not only have I made my dreams come true, but I get to prove people wrong after I was repeatedly told I could not achieve the things I have,” she said.

Michael A. Cruz, who majors in political science and international studies at City College, and Imani Dubois, a nursing student at Lehman, also received JMMF awards.

In closing, Díaz told the students, “Continue your education, and then be sure you return to your community and give back.” 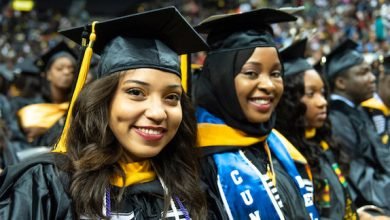