Tony Utano is head of the Transit Workers Union Local 100, which represents approximately 41,000 active workers and 26,000 retirees throughout the city’s public transportation system and some private bus lines in the metropolitan area. The following is a wide-ranging interview that touches on the recent infrastructure bill; Mayor-elect Eric Adams; and vaccine mandates, among other topics. What are your thoughts regarding the $90 billion transit infrastructure deal that just passed at the federal level?

The big thing about that is we’re going to get money to rebuild some of the infrastructure of the MTA [Metropolitan Transit Authority]. Getting that money will give us the opportunity to take on more work, to build our membership up as they’ll have to hire more people. What’s also important about that money is it comes with a stipulation to help reduce assaults on transit workers. We’ve had problems with assaults in our system. Our bus operators are getting assaulted, train operators, conductors, cleaners…there’s language in the infrastructure package that stipulates that money must be allocated for a plan to reduce and eliminate assaults. And if we don’t come with a plan, the money won’t be made available. So, we need to come up with a plan, which is good.

The plan will help with the assaults, it helps build up our members, it gives us work going into the future. There are a lot of pluses to this deal.

[Note: With the new infrastructure plan, transit agencies across the country will receive hundreds of millions of dollars combined for efforts to better protect transit workers, and the workers themselves will have a say in how that money is spent. Agencies like the Metropolitan Transportation Authority must establish a safety committee with an equal number of union and management representatives. The committee must adopt a plan with strategies to reduce the risk of assaults and submit the document to the Federal Transit Administration for approval – before getting infrastructure money from the feds. At least .75% of FTA funding an agency receives must be spent on worker-protection initiatives.]

In your opinion, is this a good deal? Is the amount of funding enough?

As long as the money is spent in a good way. What people want is to be able to get on a subway, be comfortable, get to work and have reliable service. Now we can help fix infrastructure, do track work, repairs and inspections. I think any time we get more money is good, as long as it’s spent in the right way and not wasted.

New York is getting about $10.8 billion of the federal funding. On a local level, how would you like to see this money invested to upgrade the city’s transit system?

I would like to see money invested to change the designs of the buses, better enclosures for the bus operators so people can’t punch and spit. I’d like to see more security cameras in the subway. I’d also like to see some of it invested in making the system more weather resilient, flood resistant, especially with all of the heavy rainfalls we’ve been having.

What are some of the ways that TWU has advocated for more transit funding from the federal government?

Our international union leader, John Samuelsen, has been heavily involved in lobbying Washington to get that money here. Our transit system is the biggest in the country, it runs 24 hours, 7 days a week. When it runs 24/7, it starts to break down. There’s a lot of things we need done, and having that money is going to help.

Subway crime has been a big issue in recent years, as well as attacks on transit workers, and [Mayor-elect] Eric Adams has vowed to be tougher on crime than his predecessor Bill de Blasio. What are you hoping Adams does differently to help reduce crime in the transit system?

Anything he does will be more than de Blasio did. [Laughs]. But Adams has committed to us, and I’ve talked to him, to improve safety. We’ve had some discussions, and [I believe] he’s right in what he’s saying, that if you send 10 police officers to a station, and they’re just staying on top of the station or turnstiles, that’s not where the assaults are happening. His plan is to strategically place police where assaults are happening. If conductors keep getting spit on or punched on, maybe you should be planting the police by the conductor. It makes sense. If there’s a cop standing in front of the conductor, nobody is going to assault the conductor.

And you feel the federal money will help with improving safety, as well?

Yes. It’s a good combination of several things happening. We’re finally going to have a mayor that listens to transit workers. We feel that de Blasio turned a deaf ear to transit workers. I’ve been in the papers and on TV asking him to help us but he acts as if there is no problem. Doesn’t he watch the news where he’ll see people getting arrested with machine guns and axes and hammers in the subway? How can you think there’s no problem in the subways?

A few weeks ago, it was revealed that MTA employees had a lower vaccination rate than the city average, and lower than other city agencies. At one point last month, it was below 70 percent. Where does the vaccination rate currently stand for transit workers?

Every week it’s starting to pick up. A lot of our people were vaccinated and not reporting it. From what I’m being told, the percentages are going up. Right now, we also have the option of testing.

Especially considering that your members were at extreme risk of getting the virus, and your union suffered many deaths, why do you think the vaccination rates haven’t been higher? What if the city mandates that transit workers be vaccinated without an option to test out?

I think there’s a lot of misinformation out there. There are people who are concerned about the long-term effects and are trying to gather information. To come down with a mandate would be wrong. We went out there when Covid was thriving, and we were out there moving buses and trains and helping essential workers get to work so they could save people. So far, the test or vaccination mandate seems to be working. It’s keeping the workforce intact. If they do a [vaccination] mandate and they start taking people off the job, it will be rough. We need more crews [not less].

By educating people, as time goes on, we’ll be able to convince those that are only getting tested to get the vaccine. In time, we’ll get there. We have people out there talking, we have supervisors out there talking, telling people where they can go to be vaccinated, saying, ‘We can help you.’ The numbers are going up. With the vaccine, I tell my members, ‘Let’s make it work.’ And then maybe we can say to other people in the city that we made it work in the MTA. The goal is hopefully [getting] enough education, but it should not be forced. During the pandemic, we didn’t have an option to not go to work. We went out there because we were doing the right thing. 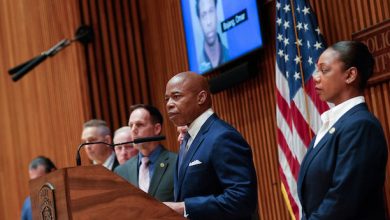 They’re with Her
Están con ella