The federal government might soon have quite the reading list.‎

With a deadline looming, elected officials and immigration advocates are urging everyone to submit individual comments on the website OurAmericanStory.us before Dec. 10, 2018.

“We do not want this rule to go into effect,” insisted Handler. “There is nothing that is okay about this proposal. The demand is that the rule be withdrawn altogether.”‎

“I want to encourage you to make sure you provide public comments and let this horrendous, terrible, misogynistic, xenophobic, racist administration know [your thoughts] on this potential policy shift.”

Sparking the animated discussion was the proposal advanced by the Trump administration to alter how “public charge” is determined.

In immigration law, a public charge determination seeks to identify people who may or are likely in the future to become primarily dependent on the government for their main source of support.

That assessment is made when a person applies to enter the U.S. or applies to become a lawful permanent resident, or a green card holder.

Currently only two main types of benefits are considered: cash assistance (such as Social Security Income and Temporary Assistance for Needy Family, or TANF) and institutionalization for long-term care. If that person uses or is thought to use those services in the future, his or her application could be denied.

Programs that would remain exempt from the proposed public charge rule include the Women, Infants and Children (WIC) program, tax credits (Earned Income Tax Credit and/or Affordable Care Act subsidies), Children’s Health Insurance Program (CHIP), education programs (such as Head Start) and other programs that are exclusively funded by states and localities.

Also, certain immigrants would be exempt, including refugees, asylees, survivors of trafficking, domestic violence and other serious crimes. People applying for U.S. citizenship are not affected by public charge rules. Children or other dependents enrolled in benefit programs are not considered if the applicant is not eligible for the benefit.

Nonetheless, the proposal has sparked serious concern among advocates, who argue that the changes will target vulnerable immigrant communities.

Handler said it is important to know that the rule is forward-looking and is based only on what happens in the future. In making the public charge determination, the government looks at the individual’s complete application. It will also take into account age, health, family situation, income, education and any available resources. Having a contract signed by a sponsor promising support is also given weight in the government’s “totality of circumstances” test considering all of the available factors.

Before changing the rule, the government must demonstrate it read and took into consideration every submitted comment.

In response, a nation-wide network of immigration and advocacy groups has created the website, OurAmericanStory.us so anyone, regardless of citizenship or legal status, could easily submit a comment. There are different templates for users, but each comment must be unique to be counted.

“I imagine you have pretty strong feelings about this,” Handler said to the audience. “You can channel those feelings formally through the public comment process.”

The government is required to review every single comment before issuing a final rule. “They have to demonstrate that they have taken into consideration the content of those comments before they can put this into effect.”

Currently more than 105,000 comments have been submitted. “The more comments, the better,” he said.

There is no set timeline for the comment review period. “There are examples of proposed rules subject to public comment that never get finalized. That would be an ideal outcome.”

If the rule does go into effect, it will happen 60 days after the review process is complete. Until the rule is finalized, there is no penalty for enrolling in currently acceptable benefits right now.

“One of the things this rule is designed to do is to confuse people and scare them out of using benefits even when they have nothing to worry about,” Handler said.

“The real issue right now is how fear is impacting our residents and our patients,” said Dr. Douglas York, UCHC CEO.

“The fear of the unknown is causing people not to seek out health care right now. We are hearing from our patients that they are afraid to come here as a family as they used to. For now it’s unfounded. But creating that environment of fear is causing people to change their behavior. And what’s so sad and so unfortunate is that they are not getting the care that they need,” York said.

He added that other community groups working with people of mixed status to find housing, legal assistance, food and other benefits are seeing the same fears emerge as well. “The fear right now—that’s our challenge while we wait for this to be addressed properly.”

“There is no comfort here”
"No hay comodidad aquí" 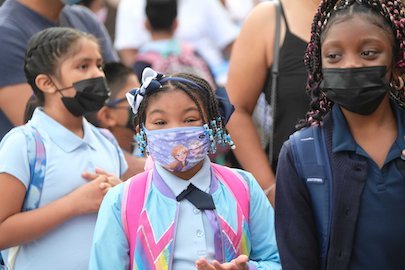