Bette in the Bronx

She recorded the song “The Rose” for the film of the same name; the movie was her motion picture debut.

Now, she is helping to ensure that they, and all manner of flowers and produce, keep blooming in the Bronx.

The event marked the completed renovation of the garden.

“This space was the most used and the most beloved of all the gardens that we acquired,” said Midler. “People can grow what they want – flowers, eggplants, tomatoes, peppers – and take all of it home.”

The renovations, which took about four months, were sponsored by The Perlman Family Foundation. It was part of NYRP’s garden adoption campaign, “Gardens for Great New Yorkers,” in which individuals can sponsor an NYRP garden’s transformation and long-term maintenance.

“It is our responsibility as New Yorkers to help ensure that all New Yorkers have access to beautiful green spaces,” said Richard Perlman in a statement. “We are honored to support NYRP in bringing a garden to life in Mott Haven, and we are thrilled to see the Willis Avenue Garden and the surrounding neighborhood flourish.”

The Willis Avenue Community Garden was originally founded in 1997 by members of the nearby Congregational Church of North New York and local residents. Recognized by NYRP as one of the city’s vital green spaces, the organization acquired the property in 1999 when it was being auctioned off as one of many gardens and vacant lots to be sold to developers. It is now one of the 52 community gardens the organization kept from commercial development.

It serves as a popular site for community gatherings, celebrations and events, and provides a rare green space for education, agriculture and entertainment for residents of Mott Haven, which is the poorest community board district in the city and poorest congressional district in the country.

A May 2014 report by advocacy group New Yorkers for Parks found that the Mott Haven was sorely in need of such spaces.

“There are parks and playgrounds, but their equipment is worn and dated,” read the report. “The spaces lack shade trees and green landscaping that would attract visitors and improve the neighborhood’s air quality and storm water management.”

A key highlight of the renovation is the new modular “casita” (Spanish for “little house”), which serves as a gathering spot and performance stage.

Designed by TEN Arquitectos, the casita was created with scalable building components that act like Lego pieces that can be measured, arranged and constructed based on community needs. At a later phase, the casita will be outfitted with Wi-Fi and solar panels for electricity and online communications-amenities that not only enhance everyday functions, but also turn the garden into a crisis center should the neighborhood be forced to go “off the grid” after a major storm.

Other facets of the renovation include:

“We don’t plan a renovation without first asking neighbors what they want and need,” explained Deborah Marton, NYRP’s Executive Director. “As a result, the transition from old to new has been seamless, and community demand to cultivate and care for the garden has never been stronger.”

The garden has already been a key venue for NYRP’s free Arts in the Gardens programming through this past spring and summer, with the casita as a performance stage for dancers and hip-hop artists, and the lawn, picnic area and pergola as places for spectators and participants to gather.

In partnership with The Bronx Museum of the Arts, the program, which also features film screenings and art installations, brings communities together to enjoy performing and other live arts in a natural outdoor setting, and highlights the garden as one of many NYRP community gardens that are resources for the public.

And Midler was not the only performer present at the ribbon-cutting ceremony.

Students from the nearby Bronx Charter School for Children sang for attendees.

“Our community gardens are more than just places to grow food; they are places where the community can connect, celebrate, and grow,” said a beaming Midler. “The Willis garden has been a central hub for this activity for many years. We will ensure that it will continue to be so for generations to come.”

Working it out
Resolviendo 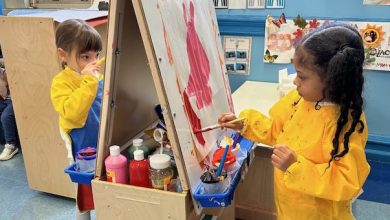