Berklee in the Bronx

The Berklee College of Music in Boston has helped to produce some of the biggest names in music, including John Mayer, Natalie Maines of the Dixie Chicks, Melissa Etheridge, and Bronxite Bobby Sanabria.

In 1991, the College founded the Berklee City Music; its mission is to reach and teach underserved students from fourth to twelfth grades by using popular music as a conduit. So far, 23,000 students have gone through the program, which currently operates from 45 sites, and has provided 1,500 scholarships to students at summer programs and four-year universities of scholarships.

There are 50 students who were formerly part of the Berklee City Music Network that are now studying at Berklee College of Music on full scholarships. 38 are currently enrolled in four-year colleges that they have also received scholarships from.

Once in the network, programs will have a two-year membership, with possibility for renewal based on “prescriptions” City Music suggests for progress.

Half the organizations vying to be part of the program don’t make it, but the RenaissanceYouthCenter stood out.

The selection process to be in the City Music program is rigorous, consisting of several on-site visits. A task force of six people decides which programs will get to join the network. Programs must score a minimum of 80 points to join the network. Renaissance Youth scored 94 points out of 100.

“Clearly, they showed they were using popular music in their curriculum, but they executed in an amazing way,” said Warner. “We were impressed with the rigor and instruction they provide.”

RenaissanceYouthCenter offers educational programs and encourages community engagement, producing concerts at housing developments, parks, and schools in New York City through its Music with A Message initiative. Their Music on Wheels programs provide music instructors and equipment for 1,300 students a week at more than 15 public schools.

Just last summer, the Music with a Message group went on an eight-week tour to 60 different shows, performing at such venues as the Javits Center and Madison Square Garden. The group also performed at the actual Berklee College during their tour. Live performances are the norm for students.

Unlike in some conservatory settings, the students have recitals every eight weeks.

“I think our organization, as a whole, in terms of how we teach is aligned with Berklee,” said Bervin Harris, founder and director of Renaissance Youth Center.

Harris has collaborated with such artists as Mary J. Blige and Eddie Murphy, and taught in SUNY Old Westbury’s music program before starting Renaissance Youth Center in 1998.

In addition to the organization’s musical training, it also seeks to offer youth a sense of importance and agency. RenaissanceYouthCenter also hosts TLT Squared, a cable show for teens by teens that offers a positive view of teenagers, who have a platform with which to show off their artistic skills.

As part of the network, Renaissance Youth will have access to Berklee City Music’s PULSE curriculum. The online curriculum is interactive and allows instructors to customize it to their students’ needs. PULSE also has a database of over 95 songs.

“There are approximately 25 additional songs recorded for which we are trying to get licensed, at which time they will be added to the curriculum,” noted Harris.

Because Berklee owns the mechanical licenses to the songs, lessons can be printed out for instruction—something that otherwise might be very expensive, explained Warner.

Among the songs in the library are numbers by Otis Redding, Christina Aguilera, and Gnarls Barkley.

Many of the songs in the library selected are contemporary, but each was chosen for a specific reason beyond its popularity.

“Crazy,” by Gnarls Barkley, for example, is a good song for beginner musicians, as the guitar part can be played in two notes, explained Warner.

Some were chosen because of their messages of social awareness, and others simply because they are timeless.

“Why are we still listening to Otis Redding long after he died?” asked Warner. It is a question the pupils will be invited to answer.

Students at Renaissance Youth Center are likely to be well prepared to answer, as they have spent time exploring and performing multiple genres, including jazz.

“They do it all,” said Harris.

For more information on the program, please visit www.tltsquared.org. 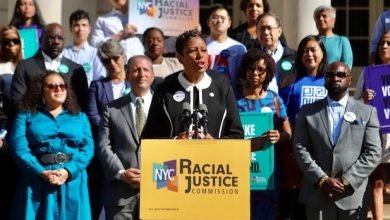 Back of the Ballot
El reverso de la papeleta

“When we fight, we win”
“Cuando luchamos, ganamos”