They’ve stuffed your mailbox with bright, large notes, and called you repeatedly at home.
They’ve sent you emails, “Friended” you on Facebook, and tweeted you.
They have popped up, every day, on the television and the radio to remind you that they care.
They have looked to greet you on the way to work at the subway, or on the way home, sometimes both in the same day.
They’ve found you at the diner where you stop in for coffee.
Repeatedly.
They want to shake your hand.
Got a baby? Look for kisses.
They really want you.
Whether running for the three city-wide offices open this year (Mayor, Public Advocate, or City Comptroller), or seeking to represent you in the City Council, candidates for elected office throughout New York have sought for months to get your attention, and your vote.
The Manhattan Times and The Bronx Free Press have followed candidates as they visit our neighborhoods in the past year. We have attended debates and forums, and have captured them at rallies and listed their endorsements.
And we have listened in on as they spoke with voters and residents.
Now, Primary Day, Tues., Sept. 10th is here.
In a city where four million voters are registered, less than 800,000 Democrats and less than 80,000 Republicans are expected to turn out.
Whatever the issue or concern that is most important to you and your family, make a decision.
Send your own message back to those who sought you out.
Vote.


For information on your polling place, please visit http://nyc.pollsitelocator.com/Search.aspx or call 212.487.5400.

Backed in the Bronx

Mayoral candidate Bill Thompson has been on a Bronx blitz.

In the feverish days leading to Primary Day, he has made it a point to spend maximum time in the borough, visiting senior centers and campaigning at subway stops.

On Fri., Sept. 6th, he spent a full day courting voters in the Bronx, making several stops along the way.

Thompson said he had had a blast greeting voters along Fordham Road.

When asked what he enjoyed the most, he replied, “I like the Bronx as a whole. The enthusiasm and spirit of the people is just great.”

And on Sat., Sept. 7th, the former City Comptroller was spotted at the Annual Barbecue Celebration of the Bronx Democratic County Committee, sporting a white guayabera.

Thompson was peppy, despite having logged only five hours of sleep.

Until then, he said he’d be fueled by a moderate intake of two cups of coffee per day.

At the Barbecue, Thompson showed no signs of weariness as the DJ started blasting McFadden and Whitehead’s Ain’t No Stopping Us Now.

Instead, the candidate jumped in to sing a few bars, and even danced along – much to the delight of his supportive crowd.

Guests were also treated to live music by salsa musician, trombonist, bandleader and activist Willie Colon, who has endorsed Thompson.

The candidate refrained from delivering a long speech.

“Every body is eating and having fun—I don’t want to mess that up,” he laughed.

But he did urge his supporters to get out the vote—and to encourage others to do the same.

“We need to make sure people get out to vote, because if they don’t, everyone else will decide who is mayor,” he said.

For Thompson, who came within 5 points of defeating the billionaire incumbent in 2009, exhorting voters to exercise their rights at the polls on Tuesday was rooted in lessons learned the last time out.

“We need to make sure everyone gets out,” he reiterated, suggesting that if more people had gone out to vote in 2009, a year that yielded one of the lowest voter turnouts in city history, New York would be a different place than it is now.

“We could’ve moved the city in a different direction. Let’s make sure people don’t wake up on Wednesday morning wishing they had voted on Tuesday,” he urged. “If the Bronx gets out (to vote), I will be the next mayor of New York City.”

New York State Assemblymember Carl Heastie, who, as the Chairman of the Bronx Democratic County Committee, served as the Barbeque’s host, expressed complete faith in Thompson, whom he has endorsed.

“I’ve known Bill for 20 years. He is a man of integrity and dedication. He’s not someone I have to beg to help the Bronx,” he said.

And while recent polls have indicated that rival Bill de Blasio is in the lead, Assemblymember Heastie was not worried.

“I’m confident Billy Thompson will carry the Bronx, and the only poll that matters is Tuesday.”

Bronx Borough President Rubén Díaz Jr., who is running for re-election, was also at the Barbecue—and has also been at many other events in support of Thompson.

“I’m hoarse because I’m talking about him to everyone, to let them know that he’s the best man for the Bronx.”

But the President’s voice sounded anything but taxed as he again praised Thompson’s virtues.

“This election is about ensuring a Democrat goes to Gracie Mansion, and not just any Democrat,” he said. “It is also about making sure that whoever is there is also looking out for the Bronx.”

Pero sí instar a sus partidarios a salir a votar, y a animar a otros a hacer lo mismo.

Make It A Lucky Friday The 13th

Back to School Budgeting
Presupuesto de regreso a la escuela 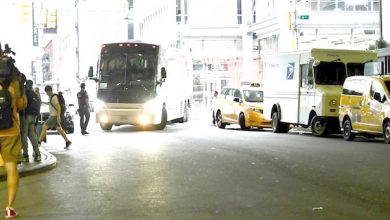 Made at Manna’s Hecho en Manna’s